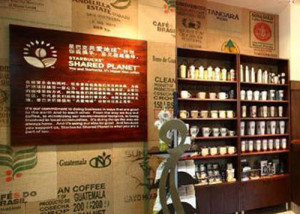 Several years ago I enlisted the skills of an upholsterer for a job in Palmerston North and during that time I met John Whitefield of Blanchetts Fine Furniture. He excitedly told me about a new fabric made from New Zealand wool and used coffee sacks.

Designed by two woman from the South Island, they had conceived and designed a revolutionary new fabric called WoJo which blends New Zealand Laneve wool with fibre from Starbucks recycled jute coffee sacks. Each square meter of fabric includes 70% wool, and 30% jute fibre.

John mentioned it was being trialled at a Starbucks in London. “Isn’t that great for New Zealand”, said John. I agreed

John mentioned it was being trialled at a Starbucks in London. “Isn’t that great for New Zealand”, said John. I agreed. Shortly afterwards I emailed one of our valued clients at the local Starbucks, congratulating them for their parent company’s innovation and asked about using Wojo in New Zealand restaurants. In February, UFO Solutions was given an opportunity to re-upholster furniture at the Starbucks in Botany which I thought was the perfect opportunity to introduce Wojo into New Zealand.

I contacted Greg Stuart of FITEC asking for a local upholsterer who had a similar business ethos who would be able to provide a quality job to industry standards. I consulted with Starbucks and their building consultants before importing Wojo fabric through our local import broker. Not long after, we finished up with a creatively coffee-sack sewn feature wall and an upholstered booth window seating thanks to a network of similarly minded and talented business people from New Zealand.

We worked together and achieved much more than individually! I know I couldn’t have completed this project on my own which goes to show how networking and creative thinking can bring it all together and make it happen!


We don't find any widget to show. Please add some widgets by going to Admin > Appearance > Widgets and add widgets in "Right Sidebar for Blog" area.